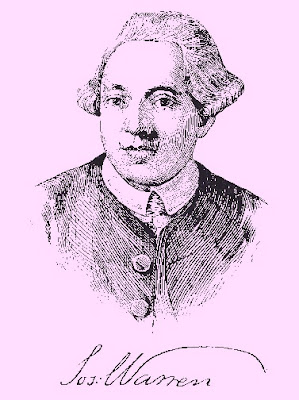 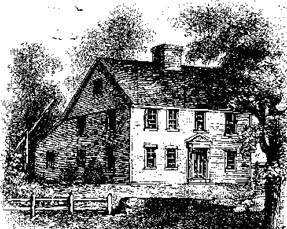 His son, Joseph, born in 1696, married, 29 Nay, 1740, Mary, daughter of Dr. Samuel Stevens, of Roxbury, and the subject of this sketch was their eldest child. Joseph Warren, the father, was a thrifty farmer, much respected by his townsmen, by whom he was elected to several offices of trust, He was interested in fruit-raising, and introduced into that part of the country the apple long known as the "Warren russet." In October, 1755, while gathering fruit in his orchard, he fell from the ladder and was instantly killed. His son, Joseph, was graduated at Harvard in 1759, and in the following year was appointed master of the Roxbury grammar-school. He studied medicine with Dr. James Lloyd, and began to practice his profession in 1764.

He married, 6 Sept., 1764, Miss Elizabeth Hooton, a young lady who had inherited an ample fortune. The passage of the stamp-act in the following year led Dr. Warren to publish several able articles in the Boston "Gazette." About  this time began his intimate friendship with Samuel Adams, who conceived a warm aamiration for him, and soon came to regard him as a stanch and clear-headed ally, who. could be depended upon under all circumstances. On the occasion of the Townshend acts, Dr. Warren's articles, published under the signature of "A True Patriot," aroused the anger of Gov. Francis Bernard, who brought the matter before his council, and endeavored to prosecute Messrs. Edes and Gill. the publishers of the "Gazette," for giving currency to seditious libels ; but the grand jury refused to find a bill against these gentlemen. The affair created much excitement in Boston, and led Gov. Bernard to write to Lord Hillsborough, secretary of state for the colonies, recommending the arrest of the publishers on a charge of treason. In the affair of the sloop "Liberty," in June, 1768, Dr. Warren was one of the committee appointed to wait upon the governor at his country-seat at Jamaica Plain, and protest against the impressments of seamen and the vexatious enforcement of the revenue laws. He was present at every town-meeting held in Boston, from the arrival of the British troops in October, 1768, to their removal in March, 1770, and he was one of the committee of safety appointed after the so-called "massacre" on 5 March.

In July he was appointed on a committee to consider the condition of the town, and send a report to England. It was apparently of him that a Tory pamphleteer wrote : " One of our most bawling demagogues and voluminous writers is a crazy doctor."  In March, 1772, he delivered the anniversary oration upon the "massacre"; in November his name was recorded immediately after those of James Otis and Samuel Adams in the list of the first committee of correspondence. During the next two years he was m active co-operation with Samuel Adams, and when, in August, 1774, that leader went to attend the meeting of the Continental congress at Philadelphia, the leadership of the party in Boston devolved upon Dr. Warren. On 9 Sept., 1774, the towns of Suffolk County met in convention at Milton, and Dr. Warren read a paper drawn up by himself, and since known as the "Suffolk resolves." The resolutions, which were adopted unanimously, declared that a king who violates the chartered rights of his people forfeits their allegiance; they declared the regulating act null and void, and ordered all the officers appointed under it to resign their offices at once; they directed the collectors of taxes to refuse to pay over money to Gen. Gate's treasurer; they advised the towns to choose their own militia officers; and they threatened Gage that, should he venture to arrest anybody for political reasons, they would retaliate by seizing upon the crown officers as hostages. A copy of these resolutions, which virtually placed Massachusetts in an attitude of rebellion, was forwarded to the Continental congress, which forthwith approved them and pledged the faith of all the other colonies that they would aid Massachusetts in case armed resistance should become inevitable.

Students and Teachers of US History this is a video of Stanley and Christopher Klos presenting America's Four United Republics Curriculum at the University of Pennsylvania's Wharton School. The December 2015 video was an impromptu capture by a member of the audience of Penn students, professors and guests that numbered about 200.


After the meeting of the Provincial congress at Concord in October, Dr. Warren acted as chairman of the committee of safety, charged with the duty of organizing the militia and collecting military stores. As the 5th of March, 1775, drew near, several British officers were heard to declare that any one who should dare to address the people in the Old South church on this occasion would surely lose his life. As soon as he heard of these threats, Dr. Warren solicited for himself the dangerous honor, and at the usual hour delivered a stirring oration upon " the baleful influence of standing armies in time of peace."

The concourse in the church was  so great that, when the orator arrived, every approach to the pulpit was "blocked up" and rather than elbow his way through the crowd, which might lead to some disturbance, he procured a ladder and climbed in through a large window at the back of the pulpit. About forty British officers were present, some of whom sat on the pulpit-steps, and sought to annoy the speaker with groans and hisses, but everything passed off quietly. On Tuesday evening, 18 April, observing the movements of the British troops, Dr. Warren dispatched William Dawes, by way of Roxbury, and Paul Revere, by way of Charlestown, to give the alarm to the people dwelling on the roads toward Concord. Next morning, on hearing the news of the firing at Lexington, he left his patients in charge of his pupil and assistant, William Eustis, and rode off to the scene of action. He seems to have attended a meeting of the committee of safety that morning at the Black Horse tavern in Menotomy  (now Arlington), and there to have consulted with Gen. William Heath. By the time Lord Percy reached Menotomy on his retreat, Gen. Heath had assumed command of the militia, and the fighting there was perhaps the severest of the day. Dr. Warren kept his place near Heath, and a pin was struck from his head by a musket-ball. During the next six weeks he was indefatigable in urging on the military preparations of the New England colonies. At the meeting of the Provincial congress at Watertown, 31 Nay, he was unanimously chosen its president, and thus became chief executive officer of Massachusetts under this provisional government.

On 14 June he was chosen second major-general of tile Massachusetts forces, Artemas Ward being first. On the 16th he presided over the Provincial congress, and passed the night in the transaction of public business. The next morning he met the committee of safety at Gen. Ward's headquarters on Cambridge common, and about noon, hearing that the British troops had .landed at Charlestown, he rode over to Bunker Hill. It is said that both Putnam and Prescott successively signified their readiness to take orders from him, but he refused, saying that he had come as a volunteer aide to take a lesson in warfare under such well-tried officers. At the final struggle near Prescott's redoubt, as he was endeavoring to rally the militia, Gen. Warren was struck in the head by a musket-ball and instantly kilted. His remains were deposited in the tomb of George R. Ninot in the Granary burying-ground, whence they were removed in 1825 to the Warren tomb in St. Paul's church, Boston. In 1855 they were again removed to Forest Hills cemetery, where they now repose.

Dr. Warren's wife died, 28 April, 1773, leaving four children. After the death of their father they were left in straitened circumstances until in April, 1778, Gen. Benedict Arnold, who had conceived a warm friendship for Dr. Warren while at Cambridge, came to their relief. Arnold contributed $500 for their education, and succeeded in obtaining from congress the amount of a major-general's half-pay, to be applied to their support from the date of the father's death until the youngest child should be of age. The best biography of Dr. Warren is by Richard Frothingham, "Life and Times of Joseph Warren" (Boston, 1865).--His brother, John, physician, born in Roxbury, Mass., 27 July, 1753; died in Boston, Mass., 4 April, 1815, was graduated at Harvard in 1771, studied medicine for two years with his brother Joseph, and then began practice in Salem, where he attained rapid success. He attended the wounded at the battle of Bunker Hill, where he received a bayonet-wound in endeavoring to pass a sentry in order to see his brother. Soon afterward he was appointed hospital surgeon, and in 1776 he accompanied the army to New York and New Jersey. He was at Trenton and Princeton, and from 1777 till the close of the war was superintending surgeon of the military hospitals in Boston. For nearly forty years he occupied tile foremost place among the surgeons of New England. In 1780 he demonstrated anatomy in a series of dissections before his colleagues, and in 1783 he was appointed professor of anatomy and surgery in the newly established medical school at Harvard. He was first president of the Massachusetts medical society, retaining the office from 1804 till his death. He was also president of the Agricultural society and of the Humane society. He frequently made public addresses, and in 1783 was the first Fourth-of-July orator in Boston. Besides"Memoirs" addressed to the American academy,
"Communications" published by the Massachusetts medical society, an "Address" to the Freemasons, in whose lodge he was a grand-master, and articles in the "Journal of Medicine and Surgery," he was the author of "Mercurial Practice in Febrile Diseases." See his life by James Jackson (Boston, 1815), and by his son Edward (1873). -- -- Edited AC American
Biography Copyright© 2001 by VirtualologyTM

A resolution Broadside dated April 23, 1775, the very day Warren succeeded John Hancock as President of the Provincial Congress. "Resolved, that the following establishment of forces now immediately to be raised for the Recovery and Preservation of our undoubted Rights and Liberties, be as follows…" Boldly signed Jos: Warren, President P. T.

Capitals of the United Colonies and States of America

*** President of the Confederate States of America

No Taxation Without Representation

US Bill of Rights